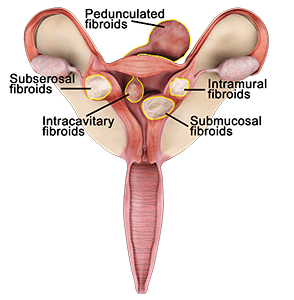 The exact cause for the development of fibroids remains unknown, but some of the proposed causes include:

The majority of women with uterine fibroids may be asymptomatic. However, the basic symptoms associated with fibroids include:

The diagnosis of uterine fibroids involves a pelvic examination, followed by ultrasound evaluation. Other imaging techniques such as MRI scan and CT scan may also be employed.

The common surgeries performed for the management of fibroids include:

Non-surgical methods comprising of steroidal medication are also used to stabilize the estrogen levels in the body.

Uterine fibroids may or may not pose complications with pregnancy depending on size and location.